I just returned from a two week conference trip in support of Forge.mil - the first week in Utah was uneventful, but the second week for the DISA partner conference in Nashville, TN at the historic Gaylord Opryland Hotel... well, let's just say it was something I don't think any of us involved will ever forget. For those that may not have been following the news, Nashville got 18 inches of rain in just two days (an all-time record) and those of us in town for the conference were evacuated from the hotel to a local high school due to severe flooding. 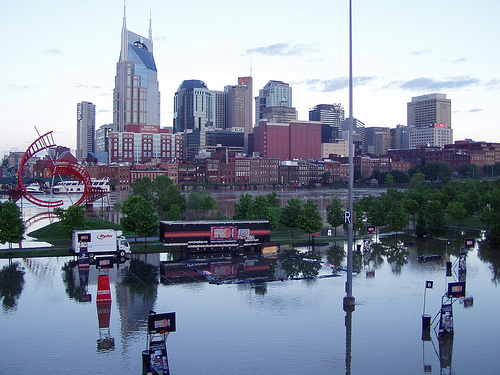 Though I was one of the folks living through this, I'd like to highlight some of the things I saw and experienced that, to me, showcase the true meaning and spirit of community. We deal in my world with community in a somewhat abstract sense, because we are talking about online interactions. However, I'm here to tell you, I saw some amazing, simple, and just plain selfless acts from folks living through the Tennessee flood situation that epitomize the best aspects of community.

For me, the following things I witnessed last week complete the sentence 'Community is...':

Now, some might argue that some of these individuals were 'just doing their jobs,' but I'd posit that what we were seeing was some of the finest examples of what it truly means to be a community. These people all put the well being of others above their own needs.

So, what does this all have to do with technical or development communities? I'd say everything - though you probably won't ever have to give your technical community members food and shelter in a storm, you can and should 'do the right thing' when one of them needs guidance, assistance, or someone to pick up the slack in a difficult time. If you are a community manager/shepherd/guide, your job should be not only to encourage this kind of behavior, but also to lead by example in this regard. Keep your hand on the pulse of the community - is there someone who is dealing with a difficult technical task/interpersonal conflict with another team member, or other thorny situation? If so, offer up whatever help you can give, even if that is just an ear to listen to them vent.

The issues that we deal with in technical communities are rarely, if ever, life and death, but I think we can all learn something from the disaster in Tennessee, not the least of which is that having the 'volunteer spirit,' like the people of that fine state, helps us in all aspects of our lives - both personal and professional.